The Newkirk Fire Department (NFD) was called to the scene of a crash early Saturday morning at the intersection of Kildare and Prentice roads east of Kildare just before 8 a.m. Emergency responders arrived on the scene to find a pickup in flames, and a second car flipped.

“When we arrived on the scene, one vehicle was on fire,” said Fire Chief Adam Longcrier “Two patients were in the second vehicle – one was in the ditch, and the second patient was still partially in the vehicle.”

The Kildare Fire Department was called to the scene to assist with the fire as Newkirk EMS technicians responded to the other patients.

“We had dispatch call Kildare to help with the fire while we dealt with the care of the patients. They extinguished the fire in the first vehicle,” Longcrier said. “We called a third ambulance for more manpower from Ponca City.”
The first victim died at the scene. The two other victims were transported to AllianceHealth Ponca City, where they were mediflighted to Wesley Medical Center, Wichita, Kan. and St. Francis Hospital, Tulsa, Okla. in critical condition, Longcrier said, adding that the both had broken femurs, along with head, trunk and arm injuries.

“They are going to make it,” Longcrier said.

The cause of the crash is believed to be driver error.

“The cause was failure to yield at a stop  sign,” he said.

Also assisting at the scene were the Newkirk Police Department and Kay County Sheriff’s Office. 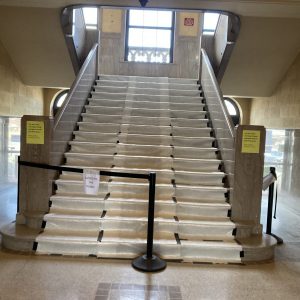