Press Release
NEWKIRK — History came to life September 2018, when several historic Newkirk citizens received special re-enactments, including Maude Gribble, portrayed by Kim Shafer Shanks. At the time, it was thought that she was the only Newkirk woman who served in the military during World War II. However, it was discovered that Agnes Wanko Schoonover also served, Hannah Cross has spent the past few months researching Schoonover.

While Gribble was a WAC, Schoonover was a WAVE.

Cross did in-depth research on women in the military during WWII, including interviewing two women veterans across the state. In a trip to the Oklahoma Historical Society library, she discovered a wealth of information that had been recently donated by a female veteran’s family. This included letters, photographs and many primary documents from this veteran’s private collection.
Cross also interviewed Schoonover’s family about her life and her service. Armed with this of information, she entered the regional Oklahoma History Day contest in Stillwater, Okla. performing a portrayal of Schoonover. Winning first place sent her to the state contest in Oklahoma City on May 1, where she received superior ratings by all the judges. She won third place in this statewide contest for her portrayal of Schoonover.
Cross will portray Schoonover at Charlie Adams Day this year. 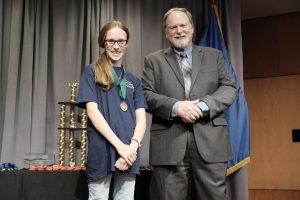